The 2017 Mazda MX-5 Miata RF is an exciting addition to the Japanese automaker’s already fun lineup.

The MX-5 Miata is an iconic car, and the RF continues the roadster’s tradition of being a lightweight and immensely fun driver’s car, all while giving it more practicality and a bold new look.

The RF version has the same mechanical specs as the soft-top MX-5 Miata, which means it’s rear-wheel drive and powered by a naturally aspirated 2.0-liter four-cylinder engine with 155 horsepower and 148 pound-feet of torque. But the RF is so much more than just a hardtop MX-5 Miata. Here are five things you probably didn’t about about Mazda’s newest model: 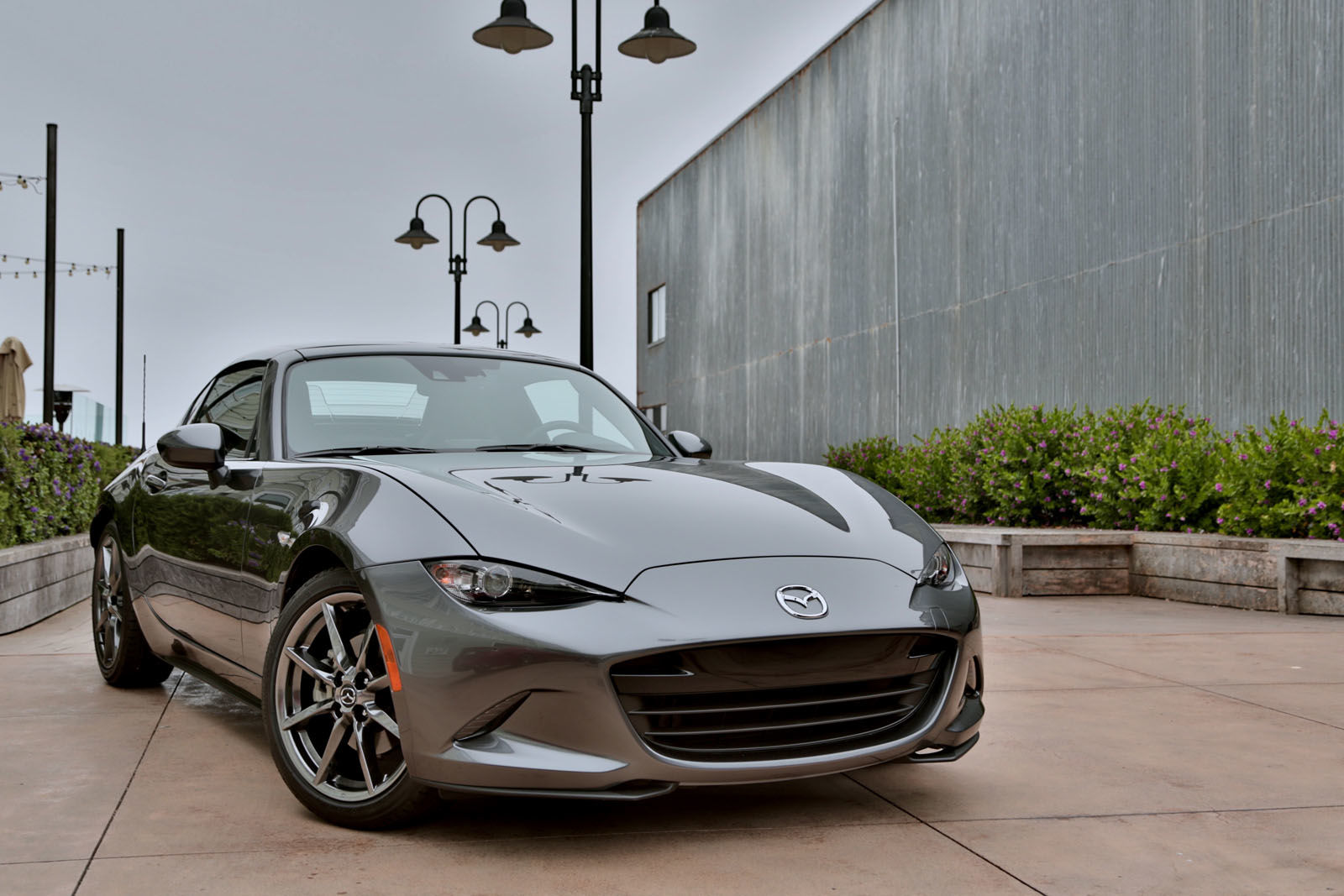 RF Stands for Retractable Fastback, and It’s a First for Mazda
The RF in Mazda Miata MX-5 RF stands for Retractable Fastback. In the past, MX-5 Miatas have come with a power retractable hardtop option that had the same look as the soft-top, so this generation MX-5 Miata brings a whole new look and functionality to the lineup and it’s the first time Mazda has ever done this. Sporting a distinctly different silhouette than the soft top model, the RF stands out as its own model, and it looks amazing doing so. When the top is up, the RF actually looks like a coupe, something Mazda says MX-5 fans have been asking for.

When the car was revealed at the 2016 New York Auto Show, the audience actually gasped and cheered when it got on stage because it’s that sexy. 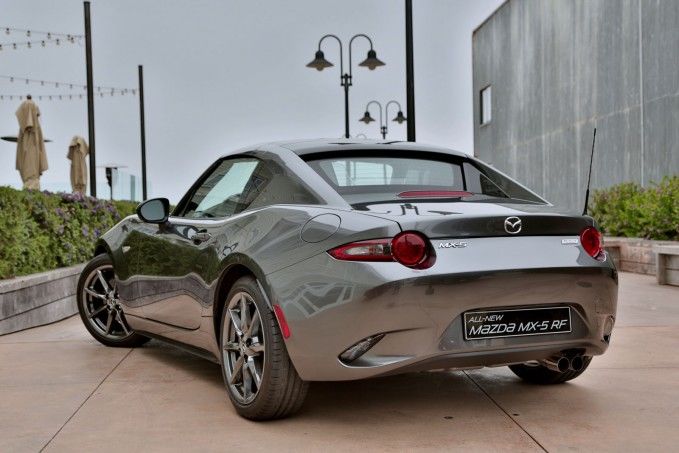 Adding a power retractable hardtop to a convertible typically adds a lot of weight to a car, but weight is a dirty word in Mazda land.

Mazda engineers are obsessed with keeping the weight of the MX-5 Miata as low as possible, so you shouldn’t be surprised that the retractable fastback roof doesn’t add a great amount of weight to the car. In total, the hardtop adds about 100 pounds, but Mazda promises that it won’t affect the car’s performance.

Mazda engineers have something called the “Gram Strategy,” where they look at every single piece of a car and try to reduce the weight of every component, gram by gram. They used this strategy extensively with the RF.

You Can Open/Close the Roof While You’re Driving 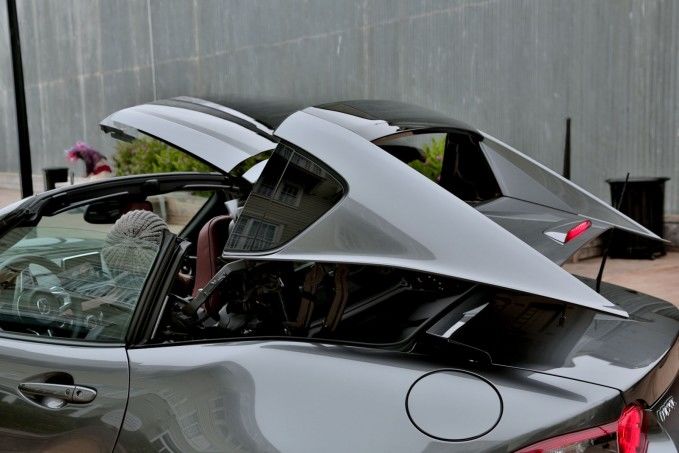 The top can be operated at parking lot speeds of up to 6 mph. Because ain’t nobody got time to wait around. Even better, it takes only 12 seconds to open and close and is completely automatic because there are no latches to manually fuss with.

The Retractable Fastback Roof Doesn’t Affect Trunk Space
Convertibles don’t have a lot of trunk space in general, but hardtop convertibles have even less space because cargo capacity is compromised when the top is lowered. This isn’t the case with the MX-5 Miata RF, which has the exact same cargo capacity as the soft-top model — about 4.6 cubic feet.

The trunk in the RF is designed to hold two carry-on suitcases, even with the top down.

You Can Buy It Soon 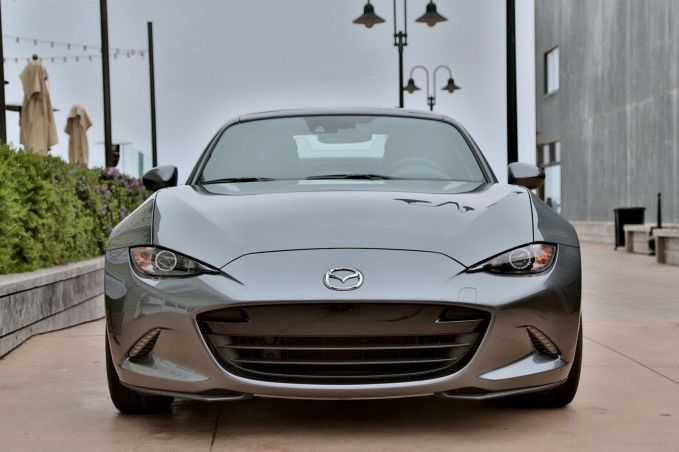 Mazda is looking for the MX-5 Miata RF to hit dealers in the first quarter of 2017. Interestingly, Canadians will be able to buy the RF about a month earlier than Americans, which doesn’t help that much, seeing as it will be winter there when the car arrives.

When the RF arrives, it will be offered in a special Launch Edition that will look exactly as it did during its debut in New York. That means it will have the special Machine Gray Metallic paint, a black roof panel, and Auburn Nappa leather interior, a combination that is exclusive to this limited edition car. The Launch Edition will be based on the top trim Grand Touring MX-5 and just 1,000 of these special roadsters will be available in the U.S. Pricing for the RF hasn’t been announced yet.